Let’s start by saying that the Spyderco Dragonfly is a small knife. Even by EDC knife standards. But this should in no way indicate pint-sized capabilities. If anything the opposite is true. The Dragonfly is surprisingly a brute of a knife. Keeping with Spyderco’s top-quality range, its design is matched by its materials. As an EDC knife it’s extremely capable, practical and portable. If you don’t lose it, you’ll love it. 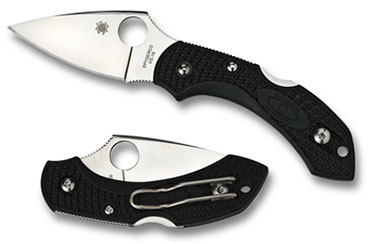 Spyderco is considered as one of the industry’s innovators. It’s because of them that we have one-handed opening and pocket clips. Spyderco come across as having a passion for knives. They’ve spent years formulating a catalogue that represents them as a trusted brand. It’s the same brand that has given us the ParaMilitary 2 and the Delica, which are both renowned as top-notch EDC knives. Spyderco have long been spitting out quality knives, and they’re a brand I would expect to continue seeing in the future.

Our Impressions of the Spyderco Dragonfly 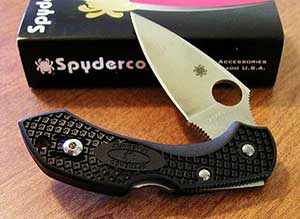 The Dragonfly is a pretty standard looking knife. That said, it isn’t ugly. It’s actually quite classy for its size. The blade is 2.25 inches, folding to a measly 3.3 inches and it weighs a feather-light 1.2 ounces (now you understand). Often EDC knives, despite their smaller size, still show in the pocket. You can still feel that you’re carrying them and others can probably see it. With the Dragonfly, it’s small enough that it’s hidden, yet big enough to be found quickly. It’s really the ideal size for anyone that hates the bulky feel of a knife in your pocket.

The blade is made from Japanese VG-10 steel. A favorite of Spyderco’s. This steel is strong and the edge is fine. As a result it can easily hold its edge for long periods of time. Because of its composition, the VG-10 can be a little harder to sharpen, but the end result is worth the wait. It can be extremely sharp. The blade is of very simple design, with the signature thumb hole. This is a trademark of Spyderco’s. The brainchild of their quest to produce the ambidextrous, one-handed deployment system.

The handle on the Dragonfly is made from FRN material. It’s textured to maximise grip and it does this well. Ergonomically, the design deceptively gives the feel of a larger knife. This is paramount to the overall feel. The main problem people have with the knife is that it’s small and the assumption is that it will be too small in the hands. This is where Spyderco really masks the small knife feel. It feels great in the hands and gives a great amount of control, especially when working with fine details.

Even for an EDC knife, the Dragonfly is fairly small. Another model along the same lines size-wise is the Boker Subcom Titan. If you’re looking to upsize, the Benchmade 940 is a great knife. It’s small enough to be useful EDC knife but big enough to handle some of the tougher jobs.

For its size, the Dragonfly is a surprise. It’s extremely sharp, and its clever design offers great handling to boot. Using top-quality materials, Spyderco has managed to produce an astounding little knife. It’s perfect for fine detail yet can tackle other everyday jobs. Its pocket-size means that it can remain hidden and won’t take up too much space in your pocket. All round, the Dragonfly is precise, elegant and functional. Don’t underestimate it.