Spyderco is one of the brands that come to mind when you think folding knife – and if you’ve never heard of them, then I suggest you check them out. They’re a cornerstone of the industry with foundations built on good-quality and well-designed knives. If Spyderco is the cornerstone, then the Manix 2 is one of the many building blocks. A sought-after addition to many knife enthusiasts’ collection. Why? Because the force that is Spyderco is on full display with a knife suited well to the demands of an EDC knife – with a little bit more to boot.

Spyderco’s owner Sal Glesser was inducted into Blade Magazine’s “Cutlery Hall of Fame” for his innovation in the industry. The Manix 2 displays that innovation through signature inventions like the thumb-hole deployment system and the pocket clip, and also the sheer capabilities of the design. Spyderco knows what’s up. 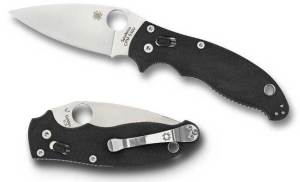 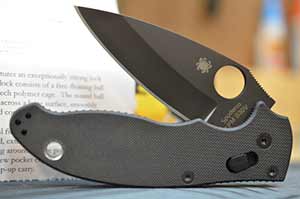 Edgy as it is out-there, the Manix 2 is a great looking knife. There’s no denying, it just looks cool. But in no way is that the reason why this knife is great. It’s “coolness” isn’t a detriment to what the Manix 2 can do. With an overall length of 8 inches and a closed length of 4.625 inches, it’s by no means a small knife. Not in terms of an EDC. As an EDC it’s starting to push the limits, but it’s still sleek enough to fit comfortably in the pocket. Spyderco has a knack for balancing knives. The Manix 2 feels great in the hand and still feels great after a bit of repetitive usage.

With a length of 3.375 inches, the blade is made from S30V stainless steel which is considered as among the best steel for knives. As a hardened steel, it can be extremely sharp but can also hold its edge well. As mentioned earlier, the blade has the thumb-hole which is part of the quick deployment system. The otherwise simple design of the blade is quite a contrast to the handle.

Like other Spyderco designs, the handle is drastic. Made from G-10 the handle has a strong grip. The texturing of the scales is similar to that of the bi-directional texturing featured on other Spyderco models like the Delica 4. Spyderco’s focus on the ergonomics is always appreciated. Lots of jimping runs along the steel liners as well. In short, the Manix 2 won’t leave your hands unless you want it to. Like the Delica 4, the handling and balancing is excellent.

You’ll notice the Delica 4 has been mentioned a few times. If you’re a Spyderco faithful I would definitely suggest you try it out. It has a closed length of 4.25 inches but here’s the kicker – it’s just 2.5 ounces. This is half the weight of the Manix 2. But then again, it depends on your personal preference. If you’re looking for an EDC knife then I would recommend the Kershaw Cryo or maybe the Benchmade Barrage 580. Both of these are great quality knives, and similar to the Manix 2.

Final Thoughts on the Manix 2

Overall, the Spyderco Manix 2 is (again) cool. It represents a innovative, cutting-edge company’s passion for knife-making. Its size means that it could be used as an EDC knife or for some of the tougher jobs as well. The S30V steel really is proven to be top-quality and this is matched by the striking and ergonomically great handle. Large amounts of jimping and scales also mean you shouldn’t be slipping around too much, if at all. As a whole, the Manix 2 reflects the genius of the Spyderco name.